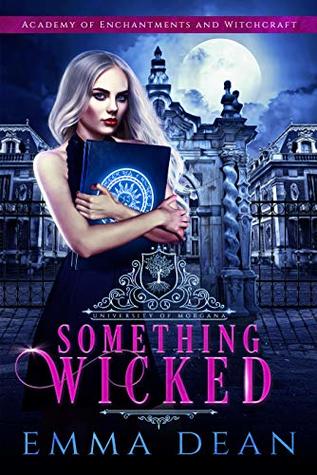 If she could make it through her first semester without killing anyone…that’d be great.

San Francisco Bay Coven has been torn apart and no one feels this more than Mika Marshall. Kenzie Kavanagh exposed her father and brother’s betrayal.

So Mika is starting at the University of Morgana a semester late and praying to the Fates that she’ll be able to catch up and graduate with her class. But as a witch with an undeclared specialty she’s trying not to bring too much attention to herself.

Because Mika has a secret and if she doesn’t learn to control her powers, people will die.

**This is a slow burn reverse harem academy series. All paranormal books by Emma Dean exist in the same world – the Council of Paranormals.

“Mika!” her sister called up. Claire’s voice echoed in the empty mansion. “Are you ready to go? We’ve got to get you settled today!”

There was so much to take care of…it felt like they’d just barely gotten everything turned in after winter solstice and yule.

Starting in the spring semester…Mika wasn’t looking forward to it.

Instead of responding she grabbed her things and dragged them down the stairs.

Claire grabbed the trunk from her when Mika hit the main floor. Her sister tried to smile. “Don’t worry. You’re going to love the university. It’s like high school, but a thousand times better.”

Mika gritted her teeth together and still didn’t say anything.

She’d hated high school and everything about it. If Selene was a prodigy, then Mika was the most mediocre, average witch to ever attend their high school. She was the same age as Selene and lightyears behind her in magical skill.

It didn’t really matter though in the long run. She’d just barely passed the entrance exams to the University of Morgana. At least she hadn’t completely tarnished her family’s name.

Mika had gotten a perfect score on the theory of magic. It was so unprecedented they’d tested her again with a proctor watching every move she made.

The test had been completely different, and she’d still aced it.

But the practical? Ugh, she didn’t want to think about that. Actual magic had always been meh for her. Lighting a candle took concentration on her part. A three-year-old could do it with barely a thought.

“The door to the university is in the coven building,” Claire explained as they made their way through the foyer. “I’ll go with you, but you’ll have to cross on your own. Someone needs to look after Grandma until she decides to rejoin the land of the living.”

“She’s still alive,” Mika murmured. “That’s more than we can say for our parents and brother.”

“That’s not fair,” Claire snapped, letting the driver open the front door for them. “Dad and Jacob are still alive. They’re just stripped of their powers and shunned.”

Mika popped open her umbrella and glared up at the never-ending rain. Where she was going would be colder, but at least it wouldn’t be raining. “Dad and Jacob are dead to me after what they did to us and Mom. Let’s not pretend we’d ever have them over for dinner.”

Her sister didn’t say anything to that, and Mika didn’t expect her to.

It wasn’t fair on Claire, but she was still so angry. Mika lived that moment over and over and had been all fall and winter. Then sitting at her mother’s side for months and simply watching her waste away…

No matter how much she loved her mother, Mom hadn’t loved them enough to fight and live and…just be around. She’d given up on everything even though Mika had been right there every, single, day.

Claire followed after her to the fancy black car without an umbrella, letting the rain mess with her perfect hair. She let the driver take Mika’s trunk from her and stood there in the rain. Mika knew in that moment she should say sorry, but she was just so angry and bitter and devastated. It would only rip her apart even more to apologize for saying what she felt.

Once everything was loaded up, Claire kissed Mika on the cheek gently and stepped back. “On second thought I should stay with Grandma. Who knows what an empty mansion will do to her. I wish you the best of luck, baby sis. Write home and all that.”

Mika held her sister’s gaze and it was like looking in a broken mirror. They both had the same nearly white-blonde hair that was their family signature, ice blue eyes, and skin so smooth and creamy people often stopped them and asked them what their secret was. Their next question was if they were twins.

Claire was only an inch taller than her, but she had the better tits.

“If you need anything or…” Mika trailed off. She almost couldn’t say it out loud. “If anything else happens, call me. My phone is always on.”

Her sister nodded and Mika got in the car. Claire didn’t slam her door closed, but it was forceful just the same. Mika flinched and regretted those words she couldn’t take back, even if she wanted to.

It felt like everything she’d shoved down and ignored was all frothing to the surface, ready to boil over and she couldn’t pretend anymore.

Mika didn’t know how to pretend to be happy, or how to be…normal.

What was normal in the witch world anyway?

Kenzie was a void witch after spending most of her life a pariah – an abomination.

And up until she’d announced it to the coven no one had even known void witches existed or what a void was exactly – a witch who didn’t have powers, but could take them. Something the universe had created for balance no doubt. Mika didn’t know the details of a void’s skills, but knowing someone could take her magic…

Things were changing. She just had to get through this and onto the other side.

It would get better. It had to.

“Take me to the coven building, please,” she asked the driver, words barely above a whisper. Speaking out loud always seemed so harsh in the sudden quiet that had befallen her family the moment her mother had fainted in that fateful meeting.

As soon as Mika got settled on campus she would call her sister and apologize. But right now she was still pissed and the only thing that would come of her calling her sister was an argument. Claire didn’t deserve that – not with everything she had to deal with now.

Claire was going to be the next Marshall matriarch, and thank the Fates.

She didn’t deserve it.

Emma Dean is the aspie author of Draga Court and the Council of Paranormals. Juggling work, life, higher education, and a rambunctious toddler leaves little room for much else, but when she gets the chance she dives into a good book and likes to re-read the Black Jewels series by Anne Bishop every year during Christmas.