Gunner and August have an intense story to tell. It has all the elements that I love. It is suspenseful, angsty, and of course sexy. ~Cali Gal’s

Gunner really stole this story for me, I know this books is a romance but his character is what kept me turning the pages, sighing and wishing he was mine. ~Elysian Fields Goodreads reviewer

Everything you want from an L. Wilder book. Steamy romance, edge-of-your-seat suspense, and a storyline that leaves you breathless. ~Book Club Gone Wrong

Another installment in the Satan’s Fury MC series, and I cannot get enough! Another great read from L. Wilder! ~Millennial Life Crisis Bookshelf

Some risks are worth taking.
Gus wasn’t just my president. He was the father I never had. He was steadfast and strong. I looked up to him and trusted him without question.
I’d never seen the man show a single sign of uncertainty until the day August James showed up at the Satan’s Fury clubhouse. None of us knew why the beautiful brunette had come knocking at our door, but we’d soon learn she was in need of help—the kind of help only a man like Gus could give.
When he didn’t turn her away, it became my job to watch over and protect her. I tried to keep my distance, but she drew me in with her soulful, dark eyes and sultry curves.
I wanted to make her mine, but August had secrets—secrets she wasn’t even aware of.
In our world, there are some lines you just don’t cross, but for her, I was about to cross them all.

I stood up and quickly lifted her into my arms, cradling her close to my chest. As she rested her head on my shoulder, she asked, “Where are we going now?”
“To bed.”
“Hmmm … okay.” She wound her arms around my neck and melted into me. “I … liii-ke you. You’re sweet.”
“Not sweet, August.”
“Um-hmm. Yes, you are. The big, bad biker is toe-tally sweet. Gunner … Gunner … Gunner is sweeeet.”
“What is it about you?” Shaking my head, I entered the clubhouse and started towards her room. “How can you get to me the way you do?”
She looked up at me with drunken eyes as she asked, “I get to you?”
“Um … yeah, you do.” I kept moving forward then said, “You’re gonna have to stop doing that.”
“Okay, I’ll stop.” Without skipping a beat, she mumbled, “What kind of name is Gunner anyway? You got a thing for guns?”
“Uh … no, not exactly.” Hoping she wouldn’t remember in the morning, I admitted, “I got a thing for getting shot.”
“Someone shot sweet Gunner? That’s just not right.” She laid her head back on my shoulder and said, “Gunner’s not your real name.”
“No, it’s not.” I continued down the hallway. “Gunner is my road name. My real name is Cade.”
“Cade,” she purred. “Ooohhh … I like that even better. You look like Cade.”

Leslie Wilder grew up in a small town in West Tennessee. A country girl at heart, she’s always thought that life is too short, but she had no idea how short it really was until her brother passed away in 2014. She’s always been an avid reader, loving the escape only a great book can give, and wondered if she had what it took to write one of the wild romances she’d come to adore. With the support of her family and friends, she published Inferno: A Devil Chaser’s MC, one year after her brother’s death. With him in mind, she fulfilled her lifetime dream of writing. Since then, she’s completed the Devil Chaser’s Series and continued on with the Satan’s Fury MC Series. She has so many stories in her head, and can’t wait to share each and every one.
Leslie has been blown away by the support of her readers, appreciating every message, review, and encouraging word she’s received over the past year. She looks forward to continuing this journey with them for years to come. 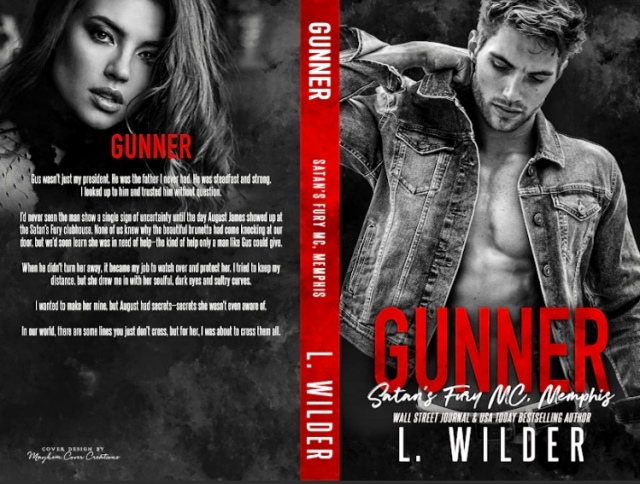