Give Me Series, an all-new emotional romance by Paige P.
Horne is releasing September 17th!

Cover Design by Cover It Designs
A past that
connects them and secrets that could destroy them.

Abandoned by her mother at only eight years old, Kathrine
Harrison was taught that relying on yourself is the only way. She grew up in
chaos, getting abused by her stepdad who reminded her daily that she wasn’t
worth loving.

Bryce Grant was used to his dad’s drinking but couldn’t
understand why the man was obsessed with a woman who constantly chose drugs
over her family. Bryce cared for only one person and did everything he could to
keep his brother, Jace, from witnessing just how bad their parents were. Tragedy
changes the boys’ lives and sets them on a path they have never envisioned for
themselves.

Meeting by chance, Kat and Bryce have no idea how much they
have in common and love is not a choice.

Can it change how they see things, or will it destroy the
life they’ve worked so hard to maintain? 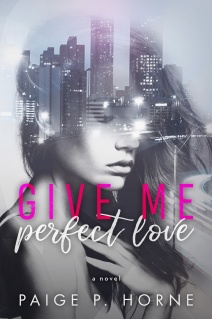 After receiving word that her
stepfather has passed away, Kathrine Harrison leaves Atlanta, Ga to return to a
town she only remembers as a nightmare. Abandoning a broken Bryce behind to
deal with the destruction he’s caused.

There’s nothing but chemistry between the two, but they can’t seem to get the
science right. Passion and lust only get you so far and once they decided to be
more than friends, things only grew deeper.

Bryce Grant is damaged, but he’s not letting his past destroy his future. He
goes after his girl, desperate to win her back.

But Kathrine gets more than she bargained for while visiting her ten-cent town.
She runs into someone she thought she’d never see again and finds out truths
she never expected.

Will she lean on Bryce when she’s at her lowest or will she break, and push the
one good thing in her chaotic life away?

Releasing October 1st
Add Give Me Perfect Love to your
TBR
http://bit.ly/GiveMePerfectTBR

Paige P. Horne lives in the small town of Gray Georgia with
her husband. The two enjoy traveling every little chance they get and binge
watching their favorite shows. When she isn’t creating new characters for her
readers to fall in love with, you can find her back porch swinging, engrossed
in a good book with her dogs at her feet.

Readers have described her stories as captivating and heartbreakingly
beautiful.