Keep your friends close and your enemies closer.
Emma survived a madman’s attack, and now she is ready to put the pieces of her life back together. After the horror she has endured, that is easier said than done. Just as she begins to feel in control once again, Fate steps in with a plan of its own. Emma must find the strength inside of herself to protect those she loves before everything is stolen by forces who wish to destroy her.
Book 2 of 3 in Heidi Renee Mason’s romantic suspense trilogy, The Vows. This is not a stand-alone romance.

Panic rose inside of her. Her stomach churned with dread. Xavier had Emma securely tethered to the kitchen chair. The zip ties cut into her flesh, and the blood dripped from the cut on her lip and pooled onto her chest.
He paced back and forth wildly, like a tiger in a cage. With her hands and feet bound, she was helpless. He came to a stop and stood in front of her, his face only inches away from her own. The insanity was obvious behind his steel-grey eyes.
“Where are the jewels, Emma?” Xavier raised his voice in anger. “Don’t tell me that you don’t know where they are.”
“The jewels?” She did her best to focus on what she needed to do to get out of the situation. She tried to slow her pounding heart, but her attempts were futile. She was in full-blown panic mode.
Without warning, Xavier punched her in the face. Her head snapped back from the force. Blood ran down her chin. He hit her again, singularly focused on hurting her. The kindness she’d observed earlier was gone. There was nothing human behind his vacant eyes. The man was gone and in his place was a monster.
Her time was running out if she didn’t do something, so she used the only tool at her disposal. She opened her mouth and screamed loudly, a blood-curdling scream that she hoped someone would hear. She yelled until her lungs were on fire, as she prayed that someone would come to her rescue.
Suddenly, the shattering sound of glass echoed in the quiet of the house. The last thing she saw before she lost consciousness was Liam…
“Emma, honey, wake up. You’re dreaming, baby. I’m right here. You’re okay,” Liam wrapped his strong arms around his wife and whispered soothing words that eventually brought her back to the present. She opened her eyes and tried to push down the terror. She was okay. She was in her bed, with her husband. 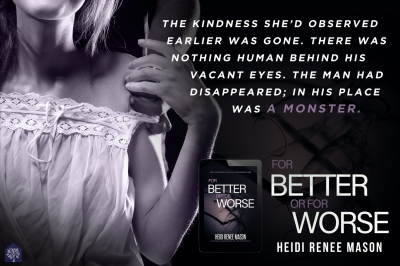 Heidi Renee Mason is an Ohio girl transplanted into the Pacific Northwest. She is a homeschooling mom of three daughters, wife of one mail man, and a people-watching introvert who can be found hiding in the nearest corner. She is an Amazon best-selling author, and writer of your next happily ever after.
Visit my publishers at http://www.solsticepublishing.com and www.hottreepublishing.com!