Burn brightly. Love fiercely. For all else is dust.

Every child of Glasnith learns the last words of Aillira, the god-gifted mortal whose doomed love affair sparked a war of gods and men, and Lira of clan Stone knows the story better than most. As a descendant of Aillira and god-gifted in her own right, she has the power to read people’s souls, to see someone’s true essence with only a touch of her hand.

When a golden-haired warrior washes up on the shores of her homeland–one of the fearful marauders from the land of the Frozen Sun–Lira helps the wounded man instead of turning him in. After reading his soul, she realizes Reyker is different than his brethren who attack the coasts of Glasnith. He confides in her that he’s been cursed with what his people call battle-madness, forced to fight for the warlord known as the Dragon, a powerful tyrant determined to reignite the ancient war that Aillira started.

As Lira and Reyker form a bond forbidden by both their clans, the wrath of the Dragon falls upon them and all of Glasnith, and Lira finds herself facing the same tragic fate as her ancestor. The battle for Lira’s life, for Reyker’s soul, and for their peoples’ freedom has only just begun.

Something made me stop.

There, sitting atop my father’s black warhorse, was a Westlander unlike any other. Long ashen hair trailed behind him. He was bare chested, as if he didn’t fear the threat of blades on his skin, and he radiated a sleek, savage sort of beauty.

His gaze locked on me.

The Savage prodded his mount. Leaning to one side, he brought his axe crashing down into the Sons of Stone who ran at him, wielding his weapon like an extension of himself. My clan’s warriors fell. Blood splashed in waves across his skin.

His eyes never left mine. My limbs were heavy as boulders, stiff as plaster.

A voice called my name. Rhys rushed toward me, sword in hand. His eyes darted from me to the Savage, trying to reach me first.

The horse was coming. My legs wouldn’t move.

The Savage veered at the last second, passing between Rhys and me, so close his calf brushed my arm, and I shivered. He circled his horse back in our direction, and Rhys grabbed me, yanking me forward. The warhorse’s hooves pounded, nearly on top of us. We only made it a few steps before Rhys stumbled and choked, eyes widening. His hand slipped from my arm. His sword fell into the grass.

A battle-axe was buried between his shoulders.

My scream was the raw, wrenching keen of an animal. I caught Rhys as he collapsed, lowering him to the ground. I looked around wildly, calling for Father and Garreth.

The Savage leaped off his horse.

“Stay away!” I let go of Rhys and picked up his sword.

With a swift kick, the Savage knocked the weapon from my grip. I drew the dagger, and he slapped it away too. He pulled me to him, smelling my hair, running his fingers through it. I hammered my fists against him, but it did nothing. This close, I saw every detail of his face, his body. I absorbed them through a haze of shock.

Older than Garreth, younger than Father. Tall, muscled, with thick hair hanging down his back in braided ropes of silvery-white. Eyes a shade of greenish-gold, like a cat’s. Black ink crawling across one entire side of his body: up his stomach, chest, and neck, then back down the length of his arm to his fingertips, coiling along one jaw and cheek, to his forehead, disappearing into his scalp. Knotted patterns, with intricately etched claws and tails and reptilian heads interwoven between the twisted links.

If the other Westlanders were frost giants, he was a leviathan; if they were beasts, he was their king.

I struggled feebly, my palms smacking his chest. Anguish had torn my mind wide open, left my abilities untethered; my consciousness plunged into the depths of his soul. Except what I dove into was nothing. Colorless, shapeless, void of sensation. The space was starkly, infinitely empty. A barren abyss.

The Savage had no soul.

I pulled my hands free, snapping back into my body as the Savage grasped my chin. “What you see, soul-reader?” The words sounded cumbersome to his mouth. He took hold of my wrist, bending it to expose the scar of flame Reyker had marked me with, laughing like my scar was a joke meant to offend him. “He is here.”

The Savage thrust one of his hands into my hair, holding my head still, and the other tightened around my waist, crushing me against him. He pulled a delicate knife from his belt, pushing my hair back and sliding the stiletto behind my ear. The blade bit into my flesh in short, deep cuts. He was carving me. Marking me, just as Reyker had, only this felt far more violent. I whimpered as blood dripped down my neck. “Mine,” he said.

A threat and a promise. 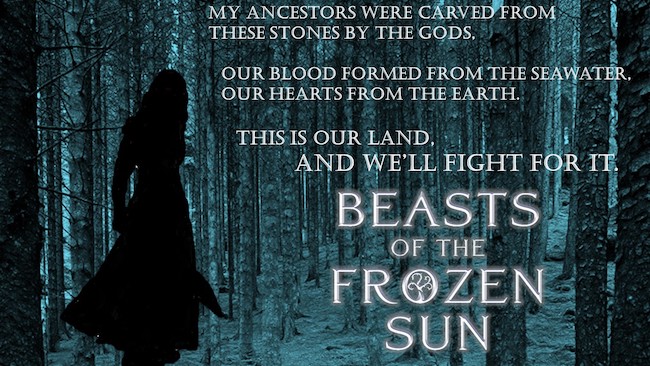 Jill Criswell is a writer of Young Adult Historical Fantasy. She was born and raised in the swamps of northeastern Florida. She earned degrees in English and Psychology and an MFA in Creative Writing from the University of Central Florida. Her greatest passion, besides reading and writing, is traveling the world; she’s visited fifty countries across six continents, falling in love with places like Iceland, Namibia, and Cambodia. She works as a university English teacher and lives in South Carolina, near the foothills of the Blue Ridge Mountains, with her husband and daughter (who is named after a volcano in Iceland).