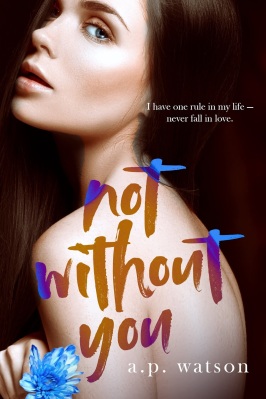 I have one rule in life—never fall in love. Sure, I loved my father and my best friend, but being in love with someone? Out of the question . . . It just wasn’t worth the risk. I saw the agony my father went through as my mother’s coffin was lowered into the ground, and he has never fully recovered from the depths of those sorrows. I won’t put myself through the same misery. I can’t.
Instead, I lose myself in my art. As a painter, I push my emotions into the colors I paint with. I usually put my entire being into every single painting, driving my fingers past the breaking point, but lately, my creative well has run dry. For over a year, my mind has taken a creative sabbatical, locking me out of my own reprieve. But everything changed when I met him. One glance into those bright blue eyes had my hands twitching with the desire to paint again.
If I thought remaining friends with my new muse was going to be easy, I was in for one hell of a letdown, because I was falling for him—fast. Handsome as hell, funny, and kind, he was everything I didn’t need, couldn’t have. I needed to remember my philosophy—live a happy, fulfilling life without falling in love. But deep down, I’m beginning to realize such a fate isn’t possible . . . Not Without You.
NOW LIVE ON AMAZON

A.P. Watson is a contemporary and paranormal romance author who discovered her love for reading at a very young age due to her rural upbringing. She enjoys a variety of genres and authors, from Jane Austen to Charlaine Harris. When she isn’t reading or writing, she loves to dance. A.P. has been an avid pole dancer for several years and thoroughly enjoys the challenging nature of the sport and the thrill of performing onstage. Professionally, she has worked as a registered nurse for several years, and she graduated with a Master of Science in Nursing in 2019. Her goal is to combine her love for aesthetics and skincare by utilizing her Family Nurse Practitioner certification in the field of dermatology. A.P. currently resides in Johnson City, Tennessee, with her adorable rescue pup, Elle.
Author Links:
Web:  http://www.apwatsonauthor.com/
Facebook: https://www.facebook.com/AP-Watson-Author-580498742137787/
Instagram: https://www.instagram.com/apwatsonauthor/
Goodreads: https://www.goodreads.com/author/show/16102410.A_P_Watson
Twitter: https://twitter.com/APwatsonauthor
Bookbub: https://www.bookbub.com/profile/a-p-watson
Reader Group: https://www.facebook.com/groups/914065365413127/
NOW LIVE ON AMAZON