Tuesday Bailey thought her relationship was fine, until her boyfriend of three years tells her that he signed them up for a once-in-a-lifetime experience with the promise of happily ever after at the end of it all. All they have to do is spend a few months on a beautiful, tropical island… full of temptations.
When a sneak peek at how her significant other is managing his time throughout the experience shows her the truth, Tuesday realizes that she has a decision to make about her own version of happily ever after.
What happens when your boyfriend brings you to an island full of temptation with the goal to see if you really belong together?
Tuesday Bailey is about to find out.

“I really enjoyed Change of Scenery by Tarrah Anders. This was one of my first reads by this author, and it won’t be my last. It’s a great beach read. Fast paced and fun!” – G. Smith

“This was a very refreshing book. The characters were down to earth, normal people. The temptation is real and I think Tuesday got the best deal in the end.” – K. Barone 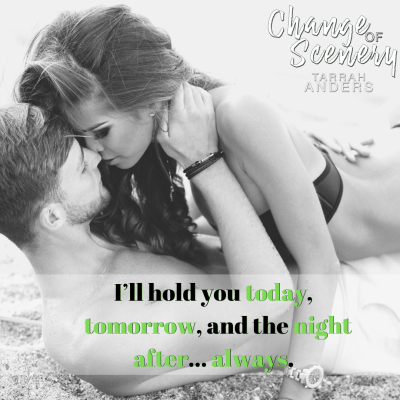 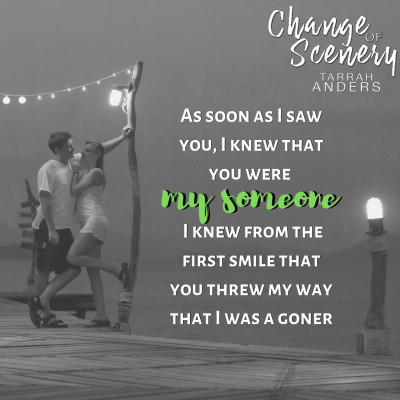 Meet Tarrah. She’s a contemporary erotic romancer who is all about the feels, with the twists of sexy mixed in between. She’s been writing since before she can remember. Writing has always been a passion, that was kept it under wraps, stayed on the backburner and never vocalized or followed through with my desire to be a writer, until she read a horrible book and thought: ‘I could do better than that!’ She kept her writing romance from her husband for nearly two years, but finally told him because… royalties and taxes. Now, he lovingly helps with ‘research’ and uses him for his amazing Photoshop skills for her covers.
She is originally from the San Francisco Bay Area, but living in beautiful San Diego with her little family while working during the day as a social worker working with the homeless. She is a hardcore San Francisco Giants fan and anything dealing with cupcakes and zombies.
Her writing style is that she tries to keep on earth. She tries her best to not be too unrealistic with her characters, what they do and how they live. She wants her books to be relatable and not to create too many eye rolls.
She has written and self-published 10 books so far in her writing career. They’re all dual point of view aside from one story. She is currently working on several pieces but focusing on two mainly. Thematically, the novels are friends to lovers, random hook-ups and office romances mixed with a whole lot of fun in the middle.