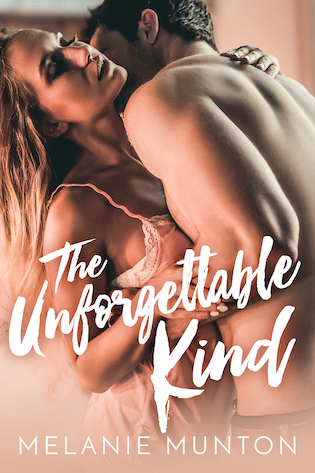 A best friends to enemies to lovers romance.

As the first female lead sportscaster with FNN (Football News Network), I’ve had to be tough and unflappable for years. No matter how far we women have come, football is still a man’s world. Which is why I’ve strutted my stilettos and lipstick on every field and around every TV studio I’ve ever worked, making sure everyone knows just how much of a woman I am. I let no man get under my skin.

We have a history, Kade and I. It goes all the way back to high school and spans our college years. We used to be best friends, but we haven’t spoken in years. Not since he left without a word, and I made it clear that I never wanted to speak to him again. Now all of a sudden he’s FNN’s newest analyst?

He thinks I’ll break. With every wink he flashes me off-camera and every grope he sneaks under the table, he assumes I’ll shed my badass shell and fall into his arms like old times.

Well screw him, his charismatic smile, and his giant di—er—ego.

I am where I am today because I’ve never let any man stand in my way.

If Kade even tries, I’ll bring him to his knees.

Fate can be a real bitch.

One minute you think you’re going to get the girl, and the next minute she’s slipping away.

It’s a complicated thing, to be in love with your best friend. That friend zone is a tricky place to be, not that I ever entered into it willingly. At least, not with Sam. Fate just seemed to place me there, despite the fight I put up.

Well, fate can go screw herself.

Sam Lawrence was always meant to be mine.

And it’s finally time that I prove it to her.

Kade is coming back.

It was his choice to end whatever we had. His decision. Which means I’m calling the shots now. And if he doesn’t like it, I’ll eagerly remind him of where he stands. At least twenty feet away at all times.

I tear off a section of the pastry and shove it into my mouth.

Son of a bitch.

Seriously, all I want is a moment where I can enjoy my hydrogenated fat and sugar and putting on half a pound in peace.

Reluctantly, I look up at my now open doorway—I really need to get a damn bell for that thing—to find the man himself casually leaning against the frame in a bespoke three-piece gray suit, hands in his pockets.

My heart sinks for a brief moment as the initial anger at seeing him sweeps through me. I never thought I’d ever think of my former best friend as the enemy. I hate that it’s come to this. I also hate that a considerable part of me has missed him. And after all the years I’ve spent trying to forget him.

“Hey, Sam.” His voice is low and even, his face inscrutable. I can’t get a read on how he feels about this situation.

I lean back in my chair, crossing my arms. “Are you new here?”

I don’t really know what makes me repeat the words I first spoke to him the day we met. They just popped into my head, and I couldn’t keep them inside. He looks just as taken aback, obviously expecting a sour reunion and rightfully so. I should be snarling and baring my fangs at him right now. There will be plenty of time for that.

“Yeah.” His mouth spreads into a hesitant grin. “First day. I take it it’s not yours?”

And that’s where I’m ending that. He’s still way too attractive when he grins, so I can’t give him a reason to do so. He has to know we are not on friendly terms.

His grin slides off his chiseled face at my clipped tone. And yes, it’s chiseled. Even more than I remember it being in college. These years have certainly been kind to him, the bastard.

I keep my expression placid. “Surprised you noticed.”

He at least has the decency to look guilty. “Believe me, I noticed. We should probably clear the air before we start working together, don’t you think?”

Time to lay this shit out very clearly for him.

“I’m not interested in venturing down memory lane with you anytime soon. Or ever.” I straighten a stack of papers on my desk before standing and walking toward him. “Our personal issues, whatever they were, are in the past and that’s where they’re going to stay. We’ll be professional to each other on and off camera. Nothing else is relevant.”

He steps in front of me, blocking my exit with his entire body. Somehow, I’d forgotten how big he is. That suit doesn’t detract from his muscular form one little bit. In fact, his broad shoulders are accentuated by the material’s custom fit. He may have been a man back in college, but now he’s definitely a man. The ways he’s aged only make him more deliciously masculine. That alone is enough to piss me off, and I haven’t even gotten to his face yet.

His chocolate brown hair is cut shorter now, so much that you can’t tell it’s naturally wavy. The crooked bridge of his nose from when he broke it during a game in college isn’t quite as pronounced as it used to be, but it’s still visible. To top it all off, he has a beard. Not a big, lumberjack-type burly thing that looks like a dead animal on his face. Oh no, it just has to be sexier than that. In between day-old stubble and something you can really grab onto. The scruff makes him look both suave and debonair, with a hint of dangerous.

He actually has the nerve to look even hotter after all these years.

I grind my back molars together. “This is my office. I don’t have to say please.”

“See, this is why I think we need to hash everything out. Maybe then we could remember our manners.”

His confidence is one thing. He’s always straddled the line between self-assuredness and cockiness. But this casual arrogance is new and isn’t sitting well with me.

“Excuse you,” I snap. “You’re the one who barged into my office uninvited. I think you’re the one whose manners are a tad rusty. I’ll be civil to you, but that’s the best you’re going to get. Don’t expect more.”

He still doesn’t move out of the way. Instead, he leans in closer to me, invading my space. But I keep my feet rooted in place. If he thinks he can bully me around and bend me to his will, he has another thing coming. I’m a seasoned pro at dealing with stubborn pricks every day in this business. He’s just another one in a line of many that I’ll have to knock down a peg or two, regardless of our history.

A muscle ticks in his jaw, his eyes intent on mine. “I didn’t tell anyone about our relationship—”

“We don’t have a relationship—”

He cuts me off with his raised hand. “I didn’t tell Mike or anyone else with the network about our past because I thought we could be adults and not let it affect our work. But if this is going to be a problem for you, we need to figure something out right now because I don’t plan on going anywhere.”

I prop my hands on my hips, my sass exploding to the surface. “And you think I’m going somewhere? This is my home, my life. I worked hard for this, dammit. I’m not about to let some guy from my childhood swoop in and screw it all up because he decided to be a dick.”

Anger sparks to life in his hazel eyes, a sight I remember well. The first physical signs of his frustration are still the same. Hands curled into fists. Pursed lips. Why is it always that the smallest, most inconsequential things in life become the most memorable ones?

“I’m more than just a guy from your childhood, Sam, and you know it,” he growls.

His face is way too close to mine, but I can’t let him see me back down. Can’t let him know how much his sudden presence rattles me.

“Maybe you used to be once, but it doesn’t matter. It was a long time ago.”

His eyes narrow. “Really. So, I’m just some dick you work with now, huh?”

What the hell does he expect? That’s all he can be. If I start thinking of him as anything more, then I won’t survive this. I have to remember that we had something special once upon a time. Something that could have turned into more—so much more—but he chose to walk away.

“Interesting that you’d choose the word ‘dick.’” He smirks, gaze traveling down to my lips before coming back to my eyes. “Is it because you remember how big my di—”

I shove my way past him and—oopsie!—my knee may or may not come a little too close to his balls. A love tap minus the love. Heh.

He’s still grunting as I start strutting down the hall.

“Come along, Mr. Jennings. I’ll give you a tour around the studio.” My voice is sweet as honey. But newsflash, this honey is laced with arsenic.

I’m pretty sure I hear him mutter “football’s sweetheart, my ass” under his breath, and I smile in self-satisfaction.

I can practically hear the imaginary bell ding in the background.

Round one goes to yours truly. 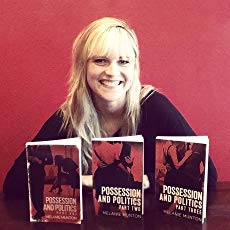 Author of the Cruz Brothers, Possession and Politics, and Timid Souls series, Melanie loves all things romance, comedies and suspense in particular because it’s boring to only stick to one sub-genre! From light-hearted comedies to sexy thrillers, she likes to mix it up, but loves her some strong alpha males and sassy heroines.

Go visit Melanie’s website and sign up for her newsletter to stay updated on release dates, teasers, and other details for all of her projects!

2 thoughts on “The Unforgettable Kind by Melanie Munton”