Blurb:
Her rescuer. Her protector. But not his Chosen.
Two years after the Dying, Amber McCoy is still living rough, foraging in the ruins of the world to survive. The pickings are slim, but not as slim as the dating pool. She’s the last living soul in San Marino, California.
Except for them. Angels? Devils? All she knows is, one of them attacked her. And another one saved her, piercing her with night-black eyes and growling a single word — run. Since doing just that, she’s been utterly alone.
Idris, a djinn elder, is inspecting the lush, green grounds of his new estate when he encounters the young woman he saved, still impossibly fragile-looking and skittish as a wild doe. Luring her with the promise of comforts she’s been denied for too long, he begins the delicate process of convincing her that she has nothing to fear from him.
As these two lonely creatures spend more time together, each touch strengthening the current of desire humming between them, Idris is acutely aware that this idyllic time can’t last. Soon Amber will be forced to choose between two paths…neither of which can ever lead to his arms.
NOW LIVE! 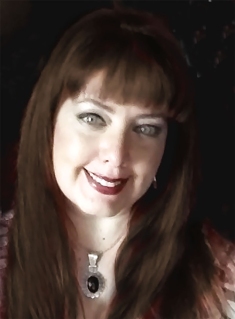 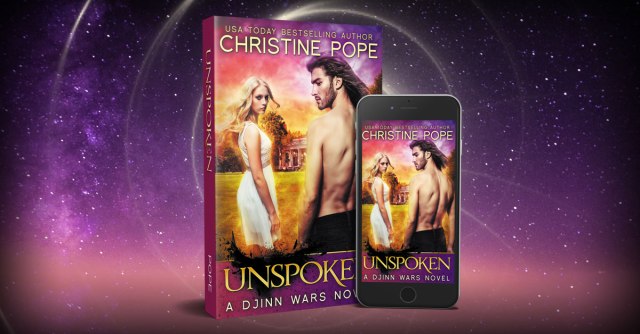 Yes, it was the girl he’d saved, but so very changed, he wasn’t sure whether he would have recognized her if it hadn’t been for her eyes. Before, she had been slender, but now she was thin, the bones of her porcelain-pretty face sharp, bluish shadows under her enormous eyes. Her pale hair was straggling and dirty, pulled back into a messy ponytail. And instead of the short skirt and form-fitting top she’d worn as she ran away from him on that warm afternoon two years ago, she had on a baggy pair of the blue pants mortals called jeans, along with a shapeless shirt and workmanlike boots on her feet.
Her hand lifted from the doorknob, went to her throat. “What…?” The word came out in a rusty whisper, and she shook her head and started over, voice a little stronger this time. “You’re real?”
“Yes,” Idris replied, a pang of unexpected pity moving through him. “What is your name?”
“Am-amber.” She stumbled over the syllables, as if it had been a long time since she’d had to say her name aloud.
And of course it had been. A whole two years, merely an eye blink for a djinn, but probably an eternity for a woman alone.
“You have been here all this time?” he asked, making sure he kept his tone gentle.
“Yes,” she replied. “Ever since that time you rescued me.” Her head lifted, and he thought he saw color flare in her pale, thin cheeks. “It was you, wasn’t it?”
“It was,” he said simply.
“Why are you here?”
A good question. He could give her an answer, but that would only lead to more questions. And yet, as he had just told himself, he had plenty of time to answer those questions, as long as they were not too uncomfortable. “This is my home now.”
Her eyes widened, and she glanced down the hallway past him to the open, skylit main room of the visitors’ center. “Here?”
He couldn’t help smiling a little. “Well, not here exactly. The main house.”
“You’re living in an art gallery?”
“It was a home once, and is a home again now. Let me show you.”