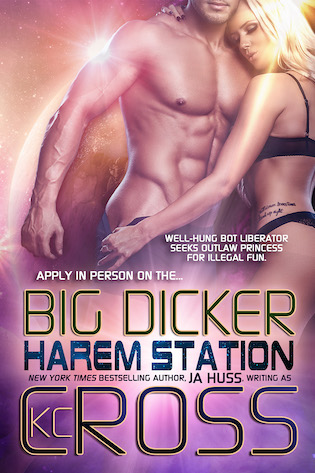 Big Dicker is a full-length, romp-y, Sci-Fi Romance that features hot, soul-mate sex on a family-friendly resort, a sentient ship with a strip poker problem, three drunk-outlaw sexbots on vacay, a crazy, but misunderstood, dragonbee bot, and an evil villainess who has big plans for Jimmy’s sperm.

All Jimmy wants is a booster shot of DNA scrambler so he never has to find his one-true soul mate. But life rarely goes the way you plan it.

After dropping Xyla off on Blue Sand Beach for a little vacay with her sexbot girlfriends the Big Dicker has to make an emergency landing on the demon-themed Mighty Minions Resort. Picture hordes of exasperated parents, sticky, crying kids, and a park AI that seems determined to suck every credit out of his Harem Station bank account.

The only good thing about Mighty Minions from Jimmy’s perspective—it’s not the place you meet your soul mate.

Until outlaw Cygnian princess, Delphi, shows up and shatters all his best-laid plans.

But Delphi isn’t there to fall in love with Jimmy.

She’s there to kidnap him and take him back to her boss, the Loathsome One. 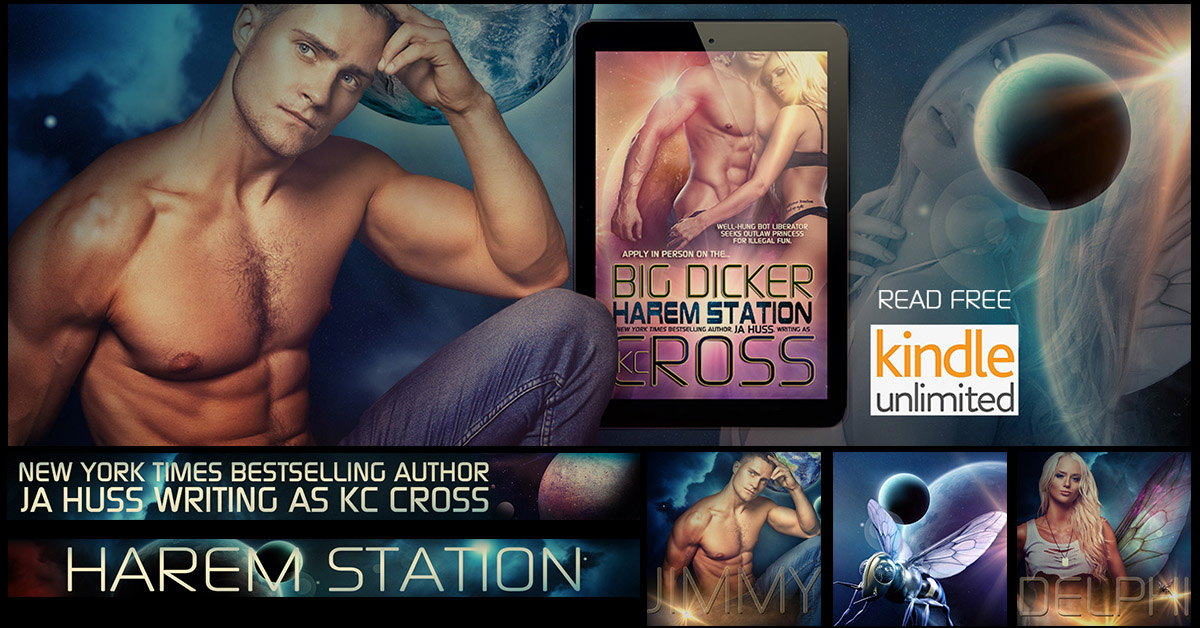 Who the hell is she?

Sun gods, Jimmy. Get a grip. She already told you in not so many words, she’s here for you!

Oh, yeah. How did that slip my mind? Like… it’s kind of an important fact, right? She’s here for me.

There’s definitely something wrong with me. Maybe she drugged me? Maybe this DNA signature scramble is wearing off?

It shouldn’t be. I’m months early for my booster. This whole trip was just about extra precautions.

But everything has gone wrong since I dropped Xyla off. When was the last time I was in danger and Xyla wasn’t around to have my back?

Never, I decide. This is the first and only time that I’ve been out in space without her.

I wonder if I could reach her from here?

I tap my wristband and find her contact, so wishing we were on Harem and I could just open an air screen or command Baby ALCOR to send a neutrino wave to her comms. I ping her, hoping that Blue Sand Beach is close enough for me to get through.

But a Mighty Minion message appears stating that while I’m not authorized for inter-station calls I could purchase an add-on communication package for the low, low price of twenty-five thousand credits.

Figures. This place is such a scam.

I decide this is worth it, so I tap the ‘Purchase’ tab. I need to get in touch with her and let her know what’s happening. My Mighty Pass chimes and says, “You can now make inter-station calls in the Vacation Sector.”

“Great.” I tab Xyla again, then wait as a little animation of Mighty Boss making a call to Mighty Hime plays on my little screen.

Xyla’s face appears. She’s in the middle of sipping a frothy exotic drink with half a dozen swizzle sticks poking out the top, and her sexybot girlfriends are all crowding into the frame. “Jim-meeeeeee!” She laughs, almost spitting out her drink.

“So hey, sorry to bother you but—”

“Jim-meeeeeeee,” all the girlfriends echo.

“Jimmmmmm-meeeeeeeeeeee!” they all say again.

For sun’s fucking sake. Has everyone on my team lost their fucking mind?

“I got a new swimsuit,” Xyla says. “Wanna check it out?” She fumbles with her wristband, taking it off, I guess, then hands it to her friend and says, “Get all of me in the frame,” as she steps back and starts modeling her new purple bikini, yellow ocean and blue sand beach in the background.

“Don’t you love it? Cha-Cha got one too. Here, Chach. Gimme that back and you model next!”

“Xyla,” I say, rubbing my temple with two fingers. Because I’m starting to get annoyed.

But Cha-Cha is already twirling unsteadily in a circle. Her suit is lime green and comes with holsters hanging off her hip strings for holding knives.

Ladybug’s suit is black with red polka dots and she’s sporting a plasma pistol on her hip.

“And look!” Xyla exclaims. “They sell SEAR swords here!” The frame rotates, goes upside down, then rotates again and then Xyla is standing backlit by a fake Blue Sand Beach sun, spinning, and kicking as she demonstrates her sword skills.

I just watch her until she’s done because Chach and Ladybug are screaming and whistling in the background.

She comes back to the wristband, takes it in her hand and shoves it up to her face, then pans it around the beach hut. “This place,” she slurs, “is a goddamned assassin’s paradise!”

“Are we assassins now?” I ask.

“We’ve decided we are,” Cha-Cha says, as she whips out her own sword, stands, erect, closes her eyes, breathes deep, and then starts doing a slow-motion kata routine complete with slow-motion talking.

Ladybug and Xyla erupt in giggles, practically falling over.

“Oh,” Xyla says, still laughing. “Did you need something, Jimmy?”

All three girls erupt in laughter.

“Yup,” I say. “It’s pretty funny. We got a virus and had to stop to get a new water generator. And now Dicker seems to have a strip poker problem and I met this girl. She’s supposed to be an engineer but she’s really—”

A siren sounds over on Blue Sand Beach and all three girls swivel their heads to the left.

“That’s the last call for the wet package contest,” Xyla says, out of breath. “Gotta go.”

And then the call drops.

What the fuck is happening?

I call her back but Mighty Boss informs me that I’ve used up all my comm credits.

Because of course I have.

Just then the bedroom door opens and Delphi walks out wearing tight leggings that hug her hips, a tight sweater that hugs her tits, and some furry booties.

Immediately I become distracted. Like… I can’t take my eyes off this cute little pink nightmare. My cocks begin to swell. Both of them. And if I was in my right mind I’d be worried about that, because my junk just doesn’t work that way. But I’m not in my right mind. My mind is consumed with thoughts of kissing her, and fondling her, and yes, fucking her brains out.