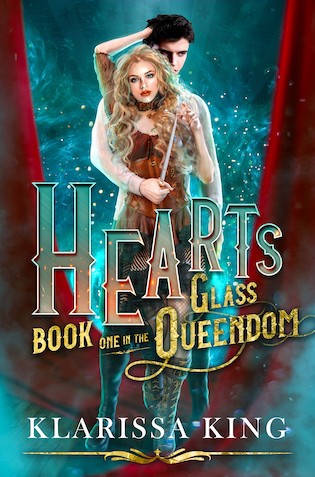 In Spades, there is a game as terrifying as the Sisters of Fate. The Hatterthon.

A game so cruel that its brick-roads run red with blood and in every shadow there are players killing to survive. The mysterious Ringmaster seized the Hatter’s once-delightful game long ago, and branded it with his mark.

The stain of death…

All I ever wanted was a peaceful life. Most other blacksmiths have no trouble holding onto small dreams like mine, and I’ll envy them for it for all my days.

Not only is my village attacked by the Heart-Breakers, in the battle I’m thrown down the Forbidden Well.

I land in the most unimaginable place, a place of true terror and wonder. A deadly game called the Hatterthon.

If I’m ever going to get back home, I have to win this dangerous game, where the brick roads run red with blood and allies are just waiting to plunge a blade into the nearest heart.

I can’t trust anyone here—especially not Night, the definitely wicked ally I picked up along the way.

I’m not sure which is more dangerous: Night, who wears deceit behind the veil of his captivating eyes, or the greatest threat in the game—the Ringmaster. All I know is, I have to strike down my ally before he turns on me and breaks much more than my bones.

Because only one can win the Hatterthon.

Before I lose myself to the madness…

In Spades, kisses taste like sweets and wine, and only when they end do you taste the poison on your lips.

Hearts is a Wonderland retelling (Hold the Alice!) and is the first in the Glass Queendom Duology. The sequel, Spades, The Glass Queendom, will be released later this year.

HEARTS is no longer a part of the Feared Fables series.

In a time that I felt nothing, Night made me feel something.

When he drew back, I let myself look into his eyes. Hunger burned back at me in those flickering purple hues.

I could have asked him again why he was here. But scraping through the inner workings of my mind didn’t seem worth it in the face of him—a face so striking that the flutter of my stomach reached up to my chest.

In all the horror and destruction around me, I only saw him. I stood with him, his fingertips dancing down to the waist of my skirt, and I felt every nerve in my body strike back against the numbness.

I didn’t care how, but he made me feel, and that was something I had a desperate urge to cling to.

Setting my skin alight, Night pushed up the hem of my blouse, fingertips grazing my pebbled skin.

My breath caught as he yanked me against him, a sudden ferocity in his dark eyes. All hesitation was snuffed out of me with that one, starved look, and my entire resolve came crashing down around me.

My hand found a fistful of his hair. I slammed my lips against his. A shudder set me alight as he tore down the front of my blouse with a single tug.

The agony in my heart threatened to drown me, drag me down into the abyss. I found air in him. And I consumed it.