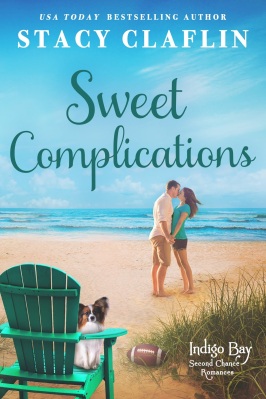 Blurb:
He can have any woman he wants… except her.
NFL quarterback Dylan Manley’s life revolves around his career and the fame associated with it. He’s only back in Indigo Bay to help with a fundraiser in memory of his best friend. But then finds he has to work with Brooke—the one person who has always made him trip over his own feet.
Brooke Davenport is a far cry from the girl next door who left town years ago. Focused on her political aspirations and still recovering from the loss of her doting brother, she wants nothing more than to return to DC for good. But first she has to get through the fundraiser with Dylan, who she blames for her brother’s death.
When a family emergency pulls Brooke’s parents out of town, the success of the fundraiser depends on Brooke and Dylan. He’ll do whatever it takes to show her he’s a new man, but every attempt only makes him look worse. If he can’t make things right, he’ll lose her forever.
Sweet Complications is the fourth book in the Indigo Bay Second Chance Romance series. Each book is a standalone, so you can read them in any order.
Now Available!

Stacy Claflin is a USA Today bestselling author who writes about complex women overcoming incredible odds. Whether it’s her Gone saga of psychological thrillers, her various paranormal romance tales, or her sweet romance series, Stacy’s three-dimensional characters shine through.
Decades after she wrote her first stories on construction paper and years after typing on an inherited green screen computer that weighed half a ton, Stacy realized her dream of becoming a full-time bestselling author.
When she’s not busy writing or educating her kids from home, Stacy enjoys watching TV shows like Supernatural, Pretty Little Liars, and Once Upon a Time.
Author Links:
Amazon: https://amzn.to/2W9WzNc
Web: https://stacyclaflin.com/
Twitter: https://twitter.com/growwithstacy
Facebook: https://www.facebook.com/stacy.claflin.author
Goodreads: https://www.goodreads.com/author/show/6591338.Stacy_Claflin
Now Available!

She tucked a strand of hair behind her ear. “I’m sorry for the things I said at Sweet Caroline’s. It wasn’t fair. Or true.”
Relief washed through him. “Really? So, you don’t think I’m all brawn and no brain?”
“I mean it. I was insensitive. The thing is, I’m used to being hard-lined and direct at work. It’s the only way to get things done. But this isn’t politics, and you’re…” Her voice trailed off.
He leaned forward.
“You’re a friend.”
Ouch. Well, it could be worse. She could see him as an ex to leave in the dust, or…
“You’re also a good person. I know that.” She drew in a deep breath. “You’ve always looked out for Evan, for both of us. For anyone you care about.”
Her gaze lingered, as did the silence between them.
Dylan swallowed. Should he tell her he cared about her? Was she waiting for him to say it? Or was it too soon?
Brooke pulled out her phone and scowled at it. “And it isn’t just that. Things at work are really stressing me out.” She looked back up at him, her eyes shining.
His heart leaped into his throat. He wanted to jump up and wrap his arms around her. Instead, he scooted closer and put his hand on top of hers. It was so soft. She smelled so good, too. Like a field of wildflowers.
“I could lose my job, and there isn’t anything I can do about it.” Her voice cracked. “And I didn’t do anything, either. Somebody’s making me look guilty to cover their own tracks.”
“What? Are you serious?”
She tugged on her ponytail and nodded. “DC is a vicious place to work.”
He squeezed her hand and resisted the urge to hold her in his arms. “Is there anything I can do?”
“No.” She blinked and a single tear ran down her cheek.
Dylan couldn’t take it anymore. He wiped the tear away. “Let me secure the rest of the auction items so you can deal with this.”
“You’d do that?”
He nodded.
“Even after the things I said to you?”
“You didn’t mean them, right?”
She shook her head no. “It was the stress talking.”
“Then let me take this burden from you.”
Brooke held his gaze, her mouth gaped just slightly like she was going to say something. Or like she wanted him to kiss her. Did she?
He wanted to feel her sweet lips on his. To stop thinking about the past kisses and experience the real thing again.
She didn’t say anything.
Dylan took that to mean she wanted the same thing. He leaned forward.