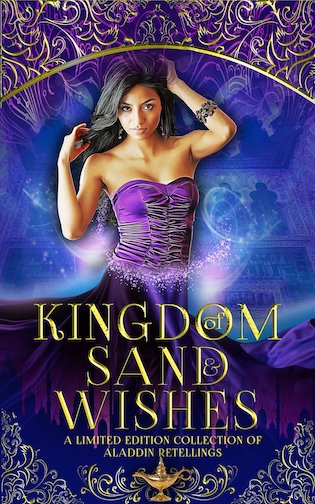 Aladdin, but not as you remember it….

On the dusty streets, around the bustling bazaars, being overlooked by a Sultan’s Palace was a land. A land of magic, secrets and treasures buried deep beneath the desert.

Through Arabian nights, dark forces are at work. Dark forces that can threaten the peace of everyone in the Kingdom. Watch our authors as they answer the question, can three wishes save the day?

Her future was mapped out…

She would one day be queen…

When a curse was cast, trapping Jini in an old lamp, her life ended along with everyone she had ever known and loved. Centuries of darkness passed and then a young man made a wish.

He wanted to be the Sultan.

The only problem? There already was a Sultan and his mysterious son had already laid claim to the throne

Read this powerful new rendition of the age old classic, Aladdin, where things are not as they seem and magic might not be enough to save them all.

The Djinn Curse By Margo Ryerkerk

How far will you go to reclaim your freedom?

My name is Roxelana, and my human life was stolen from me.

Turned by force into a djinn, I’ve waited for 100 years for a shot at freedom.

My current assignment in Istanbul presents an opportunity to break the connection to my lamp and escape my eternal slavery. There’s just one problem. Doing so means sacrificing the sultan prince to the king of djinns. I shouldn’t care about the prince, but I can’t stop myself. He has a pull on me I can’t explain. Coupled with his kindness and the care he shows his people, I’m in deep trouble.

When push comes to shove, who will I choose? Him or myself?

Filled with adventure, love, magic, and a strong heroine, this clean YA Fairy Tale is the perfect read!

If you like K.M Shea, Melanie Cellier, and Kiera Cass, you’ll love this!

Granting Wishes (A Once Upon a Curse Prequel) by Kaitlyn Davis

She’s about to discover a whole new world…

“His words come back to me—magic is the law. I guess I’m making my own set of rules.”

Alanna thought rock climbing in Yosemite National Park would be the trip of a lifetime. Until an earthquake strikes and she finds herself plummeting to her death. But instead of slamming into the forest floor, Alanna drops into a secret underground cave where she’s confronted by the impossible—magic.

A mysterious man named Erick uses incredible powers to save her life, then tells her that his magical world has collided with earth, merging the two together. Alanna writes it off as crazy, until he shows her a vision of her brother being dragged down a sandy cobblestone street in chains. Crazy or not, she’ll do anything to save him.

As Alanna and Erick team up to rescue her brother from the clutches of a decrepit sorcerer king, fate intervenes in the form of a handsome prince. Alanna doesn’t know who to trust, but in this foreign land, flying solo just might get her killed…

A beautiful genie craves her freedom. A handsome prince longs to heal his kingdom. And a con artist named Aladdah has big plans for them all.

Between theft, sleight of hand, and her indentured servitude to a powerful magician, Aladdah has always managed to survive the brutal streets of Citron. But survival isn’t enough for a woman of Aladdah’s ambition. She craves more—more food, more power, and more magic than her master has seen fit to teach her.

When she demands a greater challenge, her master sends her on a mission into an enchanted cavern beneath the desert sands. There, in an abandoned garden glittering with the lights of precious jewels, Aladdah discovers a genie whose power and beauty are matched only by her determination to escape the bonds of her servitude.

But the genie is bound by her magic lamp, subject to Aladdah’s every wish, and it’s an opportunity no self-respecting street rat could resist. Aladdah forms a plan to use the genie to destroy the sultan and establish herself as a new ruler who will turn the savage inequality of Citron on its head.

But the sultan has many protectors, from his court magicians to the beautiful, idealistic son who infuriates and enchants Aladdah in equal measure. Her genie fights her at every turn. And her old master will not be dismissed so easily, not when he has a plan to gain power the likes of which the kingdoms have never seen.

Sultana of Amethyst Sands is a romantic, fast-paced adventure through the sands of a faraway kingdom of magic, genies, and wishes come true.