1. What was the inspiration behind this story?

A.D. Wayne: I am a Trekker, I read Superman, I wanted to create something based on what I love about science fiction and give it life. Characters like Col. Samantha Carter from Stargate SG-1, Starbuck from Battlestar Galactica (remake,) and Mr. Data from Star Trek The Next Generation, are only a few that inspired me. The main one being, Captain Lorca.

2. Tell us about your main character.

A.D. Wayne: My main character is Frankie Stein. She is an IT at CaldTech Industries, abducted and taken from the 21st century only to end up on a starship in the 26th century. She has that natural and nerdy look to her. Jogging pants, Rick & Morty tank tops and shirts, tattoos, and black hair. However, she possesses something that permits her to assimilate information so quickly, that she goes from abducted civilian to 1st Commander on the starship.

3. Which is your favorite minor character and why?

A.D. Wayne: I would say that Helle Madsen is my favorite. I did use my best friend, Kendra Hale, to create her. She becomes closer and closer to Frankie and along the series, her conscience. She is there to remind Frankie that all is well, and they’ll get through it all together. Helle is a strong character and helps the understanding of the story. Her strength and determination to protect who she loves goes far and I love it.

4. What is your favorite personality trait of your main character?

A.D. Wayne: Frankie is forged after me. I know it sounds selfish to do something like that, but I wanted to prove to myself that it’s not because you are scared that you cannot be strong. I needed to make Frankie as weak as I could see myself be. I gave her PTSD, chronic anxiety, OCD, night terrors, insomnia, cardiophobia, arachnophobia (you’ll see why,) and IBS even. She has it all and must keep moving forward. She has no other choice. I wanted to give people who live with those problems to see that you are a hero, you are represented, and you are not alone.

5. What is your favorite personality trait of your bad guy/girl?

A.D. Wayne: His devotion. Zachariah is one alien that despises being tested, but his relationship with Frankie has him rethink many scenarios. He despises Captain Caldwell, yet, he doesn’t kill at will. He is a thinker and devoted to his past. It’s really only by reading the book that you can truly understand the meaning of the character and his place in the story. 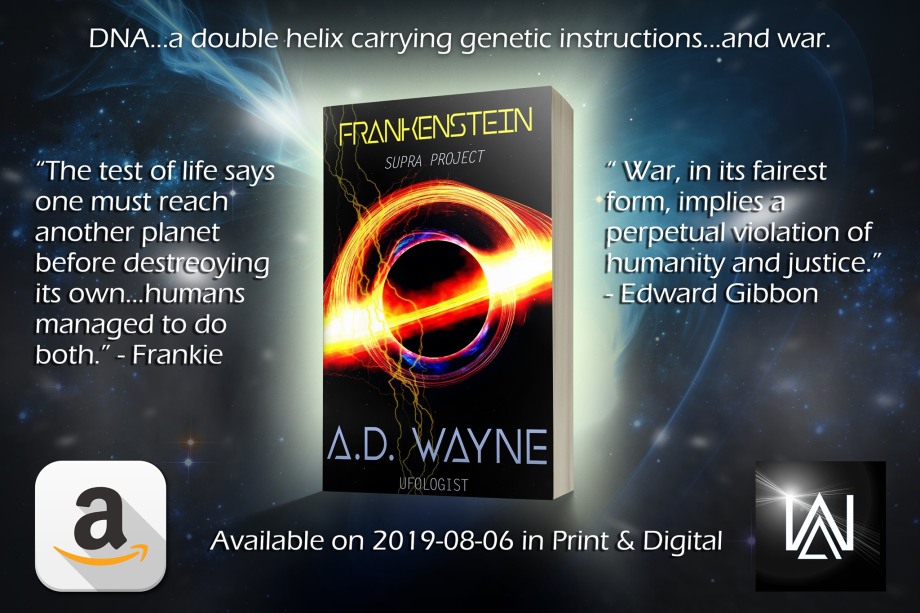 6. Tell us something funny about one of your characters.

A.D. Wayne: Frankie is the only human from the 21st century Earth. Although there are many humans on board the ship, most of them are from the 23rd century and up. So, while she finds herself funny when spitting out puns like, “I’m here to kick ass and chew bubblegum, and I’m all out of bubblegum.” Nobody understands her. So, she keeps repeating, “Yeah, well it would’ve killed in the 21st century.”

7. I’m inviting your main character to dinner. What should I make?

8. Were you surprised by the behavior of any of your characters or the direction of your plot at any point while writing?

A.D. Wayne: You have no freaking idea! You know when you create an outline of your story, and with my OCD, believe me when I say it’s well detailed. Frankie kept on zig-zagging all over the place, one more turn and I had to put a leash on that girl! All I knew was how I wanted the book to end, on a mind-blowing cliffhanger that readers would want to slash my throat. Haha!

9. Please share a few favorite lines or one paragraph.

She closed her eyes, knelt to the ground as slowly as she could, and crawled close to the entrance of the room. Once opened, what she saw, created a sudden gag reflux. There was no more time to be discreet, as she threw up bile on herself. She jumped on her feet and shot the two crewmates. Both of them hung from the ceiling by metallic hooks resembling ones used by fishermen. It pierced through the bruised flesh on their backs. Denuded, the two men were hanging, their head falling forwards. A wide X incision covered their abdomen, buckets at their feet, letting the blood drip down as Rakes exposed their tongues.
When Frankie saw the scene, she expected as much, but not for both crewmen to lift their heads up, orbits emptied from their eyeballs, and screaming without a tongue to articulate their pain. She shot them both between the eyes, and their heads fell forward instantly once she shot them both out of their misery. Twenty-eight Rakes came forward, angry, as they showed their long curving claws perfect to grip their prey as she stepped back. Frankie analyzed the situation rapidly and calculated her chances of survival if she ran through the ship. 9%. Not high enough. She thought to herself, she needed another strategy.
Frankie noticed a tall man with a black uniform, and a helmet covering his head. Impossible to see through, she blinked and hoped her ocular scanning lenses took a picture. She noticed his belt with a scarab looking device attached to it. “You’ll have to do mate!” She propelled herself onto the man, elbowed his head, and then his stomach before injecting herself with the decoding serum, and entered the code, “Sextans A, NGC 3115, Slicer LSS, Authorization Code 05bw3d.”

10. How long did it take you to write this book?

A.D. Wayne: This one took me a month due to the amount of research I had to do in quantum physics and general relativity in the speculative science category. I take my science fiction quite seriously and I wanted to make sure that all the technicalities and starship functionalities were already in speculative sciences.

11. If your book was made into a movie, who would you like to play the lead characters?

A.D. Wayne: Captain Jason N. Caldwell is entirely, a hundred percent, over the top, based on the sexiest man alive, Jason Isaacs. Like I mentioned earlier, I’m a Trekker, and the first season of Star Trek Discovery shows Jason Isaacs as Captain Lorca. When the character *spoiler alert, dies, I thought it was such a waste that I sort of “recycled” him and created Captain Caldwell. I admired Jason Isaacs ever since I watched, Event Horizon, which is the movie that had me want to study astrophysics. I settled for sequential art and astronomy. Haha! As for Frankie, her appearance is loosely based on the super talented Swedish actress, Rebecca Ferguson’s facial traits and acrobatic skills.

A.D. Wayne: When creating the story and my main character, I realized she was broken in so many ways and she tried to patch each piece with something else than herself, that she almost became a monster to herself. She is known as Frankenstein, she wears the name and rock it, but it’s not who she is within. I had to use her name she made for herself.

13. Tell us about your cover art and how it pertains to your story.

A.D. Wayne: Frankenstein has two distinctive covers. One for the masses, and one Limited Collector Cover Variant Edition. The main mass paperback/digital one shows a black hole and for a good reason, again if you read the novel. The collector edition shows the badge for the Liberty Military, I created. It stands for the freedom of all planets and nations, the last line of defense between freedom and enslavement. The collector edition is one I am most proud of because it is a hundred percent me and my twisted mind, simple and neat.

14. Of all the books out there, why should readers choose this one? (What makes your book stand out from the rest?)

A.D. Wayne: I’m not going to say my book is unique because I used inspiration from all sci-fi I’ve watched over the years and enjoy. However, the story and the characters have depth and go through terror, pain, mental breakdowns, torture, faces the impossible at every single turn! It doesn’t matter if you enjoy sci-fi or not, this is Mission Impossible in SPACE! How can you say no to a full-packed action novel series that starts with a book named, Frankenstein? 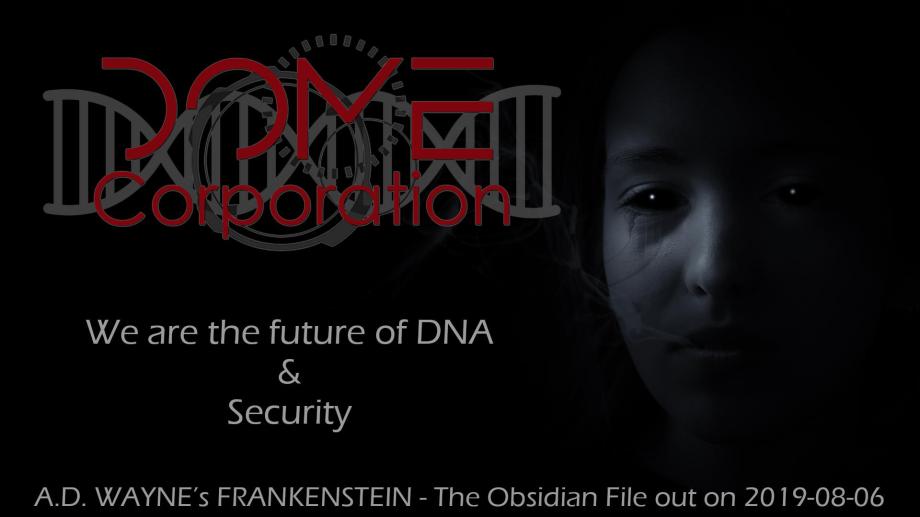 15. Is there an underlying theme in your book? If so, tell us about it and why/if it’s important to you.

A.D. Wayne: Hatred is one thing I am firm about, I want to end it and fight it. I want it to vanish and disappear. So, it is always portrayed in my novels through many levels. From racism to sexism and aliens. I go far into it and bring the worst out of people for readers to feel how hatred can be ugly and turn people from kind to monsters.

16. Fiction can often provide powerful life lessons. What message do you hope readers get from your book?

A.D. Wayne: It’s not because you are scared that you cannot be strong. With Frankenstein I hope people understand that mental illnesses shouldn’t be hidden and talked about. Frankenstein is to show readers will power is the only true power that drives us all.